Adding Client-Side mods to your modpack

Learn how to add a new mod to your modpack

Playing modded Minecraft is fun, but sometimes the modpack as given is just… missing something. Maybe you want to be able to sort your inventory at the push of a button, or maybe you want to show off what server you’re playing on in Discord. Maybe it’s your first time on Mystical Machines and you want to install some additional mod. In any of these cases and more, installing additional mods can be a rewarding investment to make your game experience that much better. If you’re not accustomed to the process, follow the steps below.

Step 1. Download the mod jar and any other files needed.

For any mod, you’ll want to download it from the appropriate page. Note that while clientside mods are generally safe to add, mods that add items or require being installed serverside WILL NOT work, and will prevent you from accessing the server. In addition, mods that are for the wrong version of Minecraft will not work, and will often prevent your modpack from loading. Finally, some mods require other mods to be installed before they will work. These mods should have a notification on their page stating this, and a link to the required mod’s download page.
Good places to look for mods include

Some mods are also only accessible from GitHub, though you want to be careful that you’re getting them from the official developer in those cases.
Mods from other sites can be used, but be careful of illegally reposted mods from third-party sites, which can have problems ranging from old versions to packaged malware. Click here for a list of websites to avoid, and here for more information on the problem.
Once you’ve downloaded the mod files, open up the Downloads folder, or if you saved the file to a different location, the folder you saved it to. Leave this window open for later. You may want to select and copy the file to save time later.

Step 2. Open the modpack folder from your launcher.

The second step in the process is to open the modpack folder from your launcher. The two main launchers for our network are Twitch Launcher and the FTB Legacy Launcher. Instructions for each are given below. Note that from any modpack folder, you can hit the “Up a level” button in your file explorer to access the Instances folder for that launcher, which contains all modpacks you access from that launcher. This can be used to quickly install mods across multiple modpacks, or if you already know where your launcher stores files.

Upon opening the Twitch launcher, navigate to your modpack selection window. 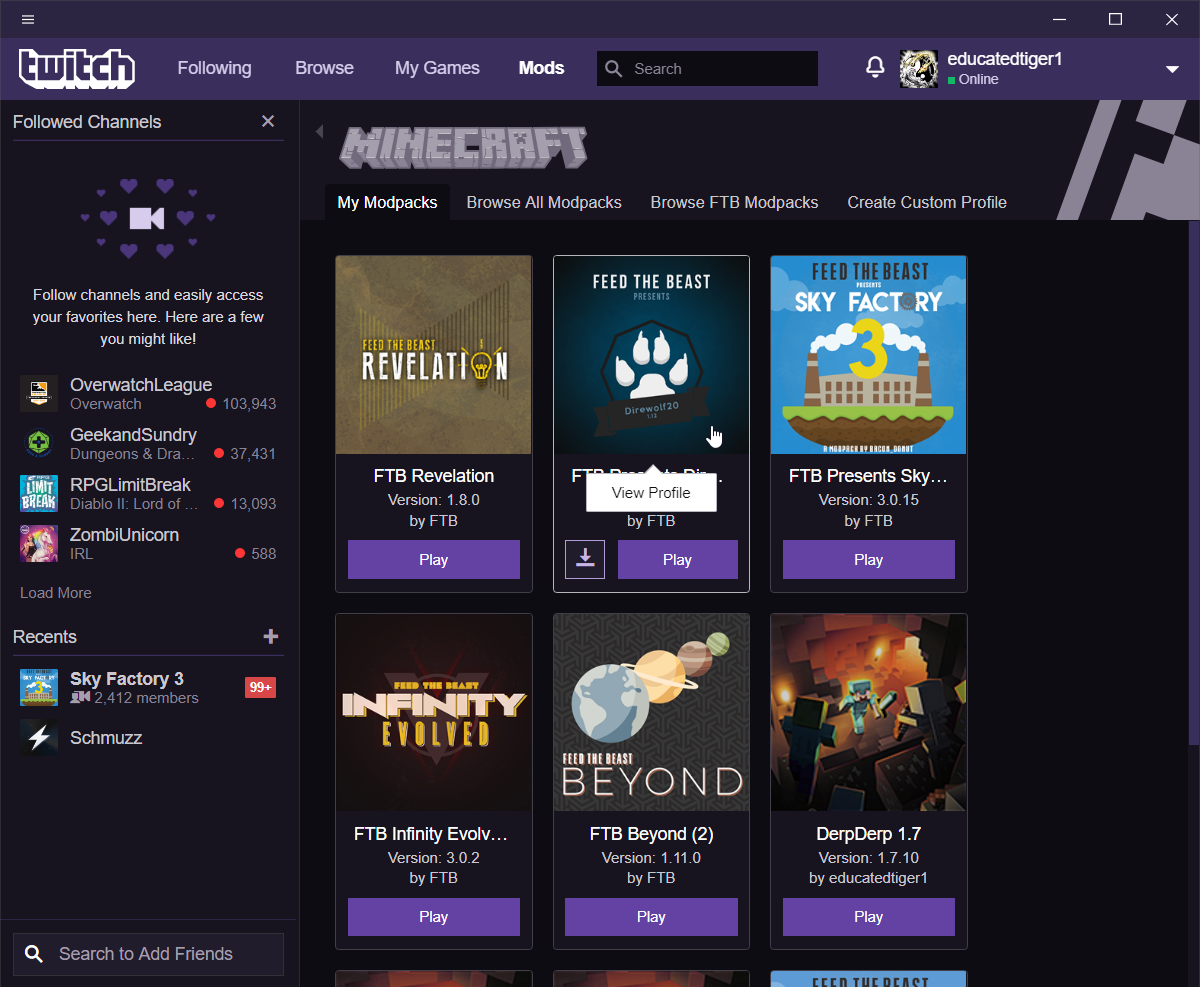 Click on the image of the modpack you want to add the mod to. This opens up the modpack window, which displays, from top to bottom, a list of options, some information on the modpack, and a list of mods. 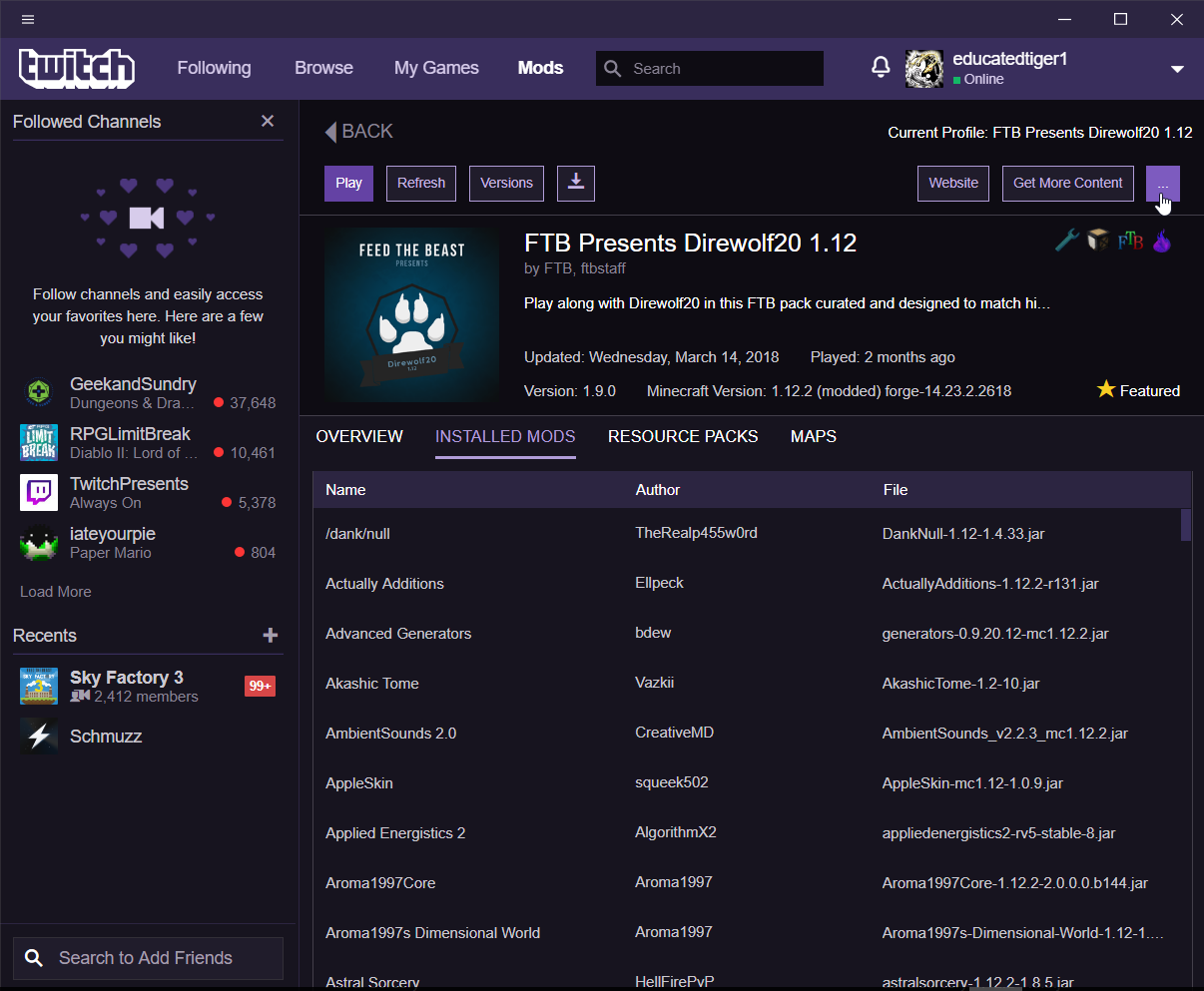 Before opening the modpack folder, you’re going to want to unlock the modpack. You can edit the modpack via folder without doing this, but it’ll prevent any complications. Also, this will allow you to edit it via the launcher, which will allow you to add CurseForge mods without downloading them or worrying about incompatibilities.
To do this, look in the top right of the modpack window. You will see a button with a […] image. Click it to open a menu of additional options. Click on “Profile Options”. 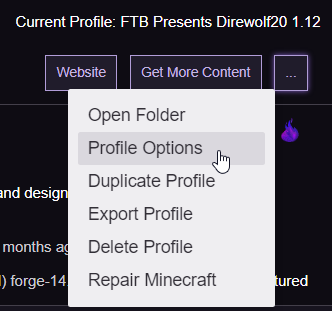 This will open the Profile Options window. On the top two lines is the Profile Name. Below this, you will see a checkbox that says “Locked”. If this is unchecked, you can skip this. If the box is purple with a white checkmark, like below, click on it. 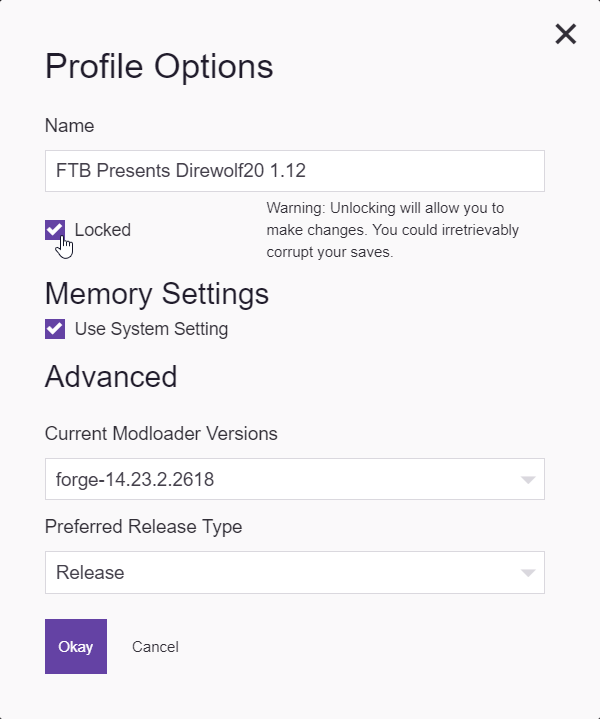 Once it’s unchecked, you can click the “Okay” button at the bottom of the screen. 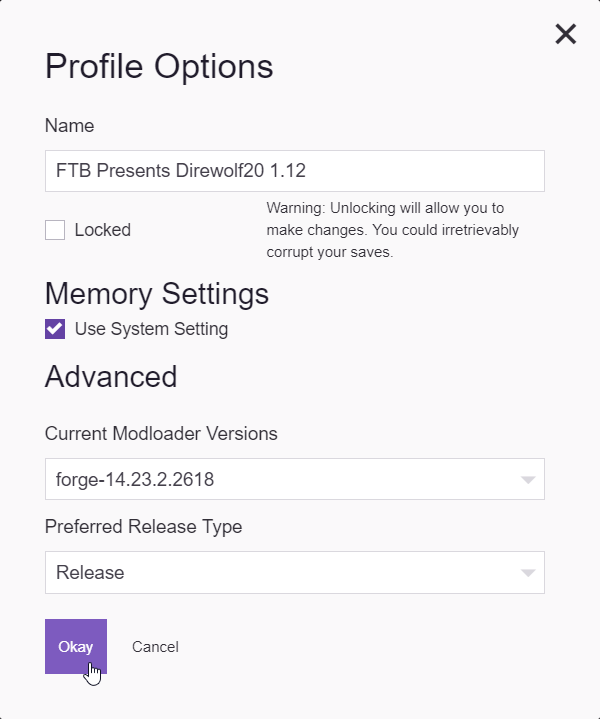 You will notice some changes to the mod list on the screen. Click the “[…]” button again, and then the “Open Folder” button. 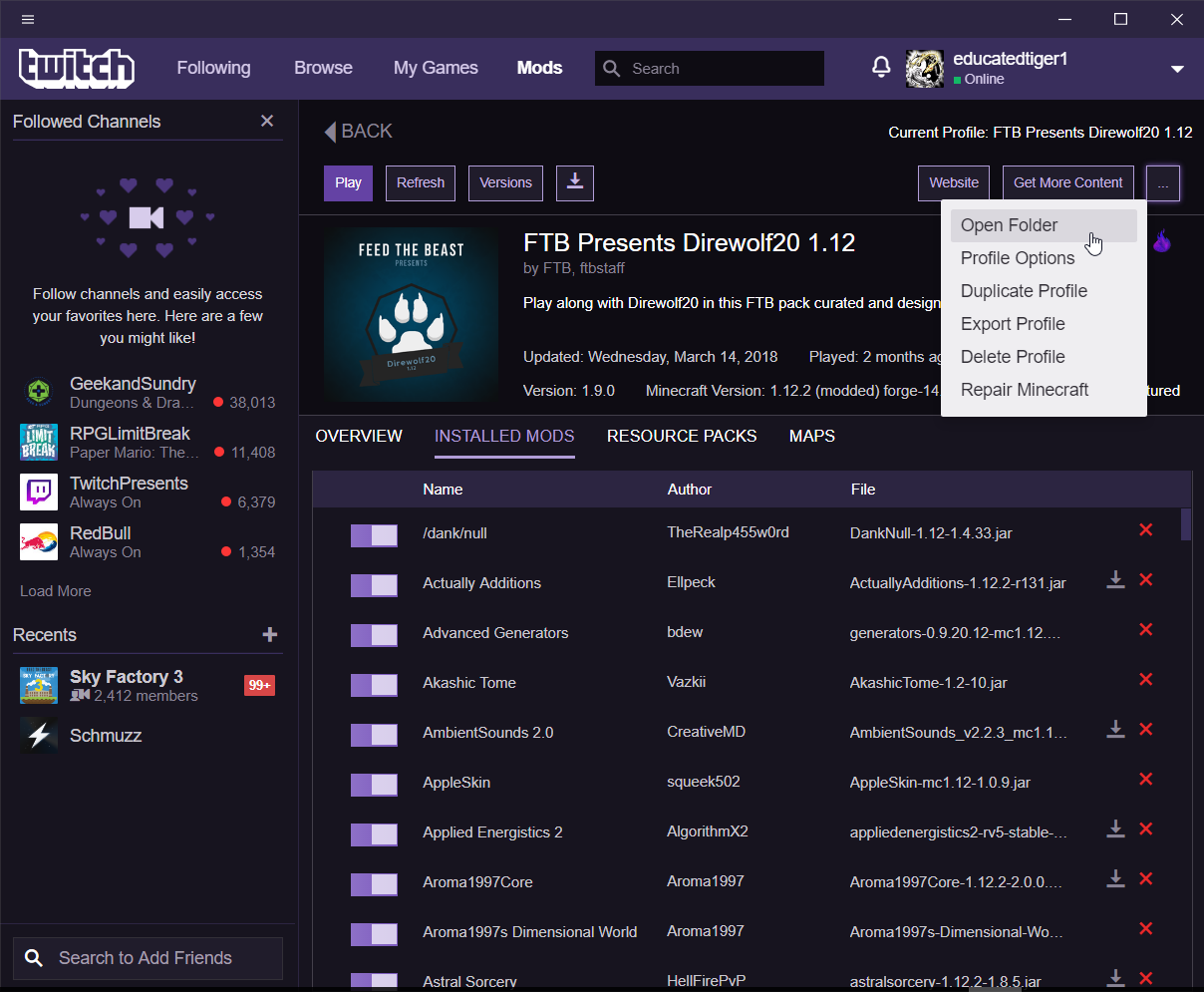 A folder like the one below should pop up. Congratulations! Go to Step 3. 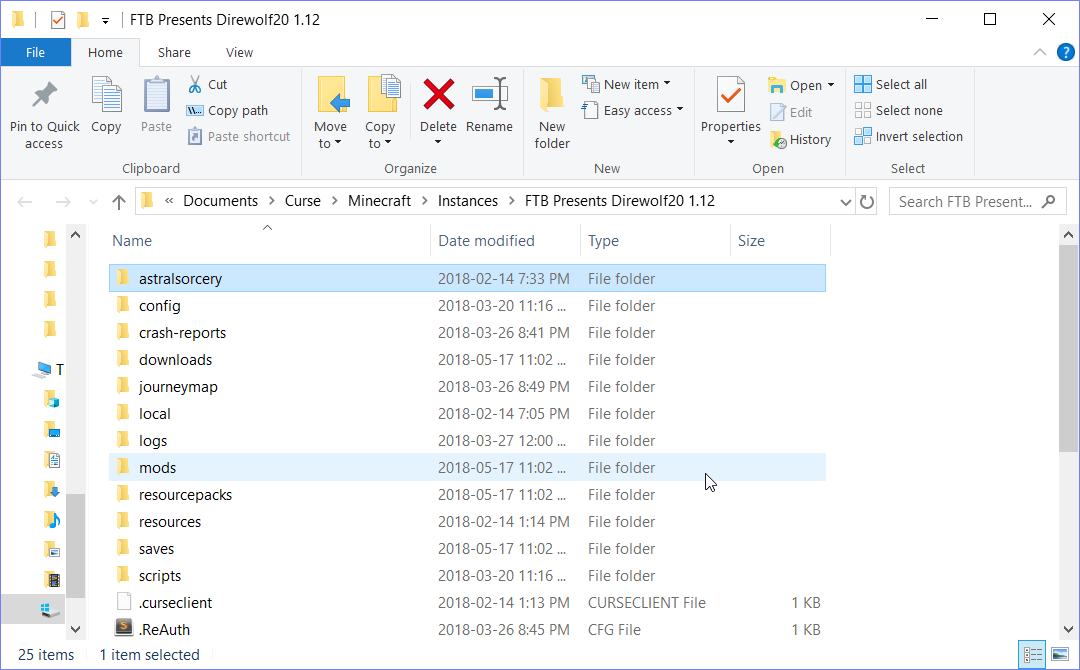 When you open the launcher, navigate to the modpack you want to open the folder of. You should see a window like the one below: 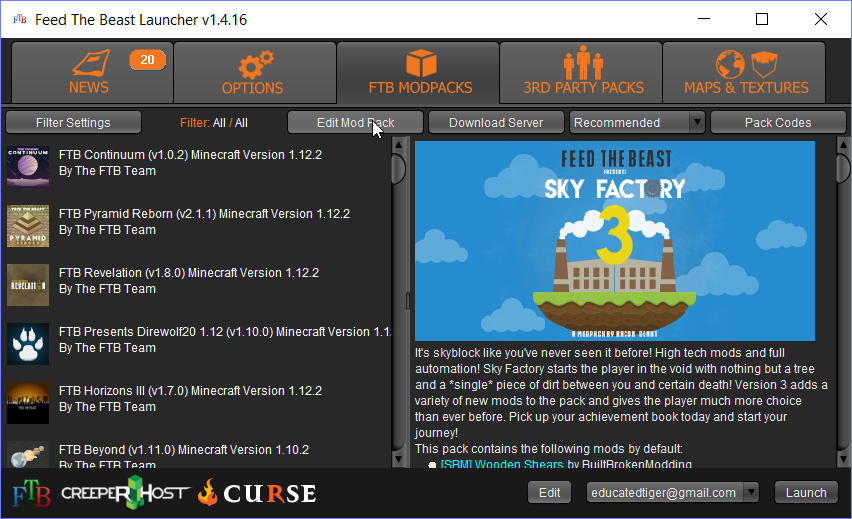 In the second row of buttons in this window, just left of center, is a button that says “Edit Mod Pack”. Click this button to open the Mod Pack Editor window.

In the bottom left of the Mod Pack Editor window, there’s a button labeled “Open Folder”. Click this button. 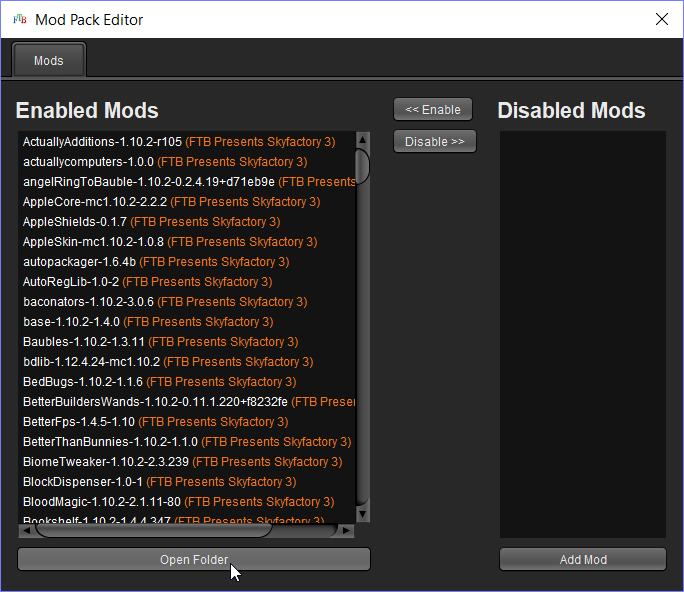 This will actually open the mods subfolder of the modpack folder. This is fine in most cases. In the event that you need to add a resource pack or other file, you will need to hit the “Up a level” button in your File Explorer to get to the modpack folder. 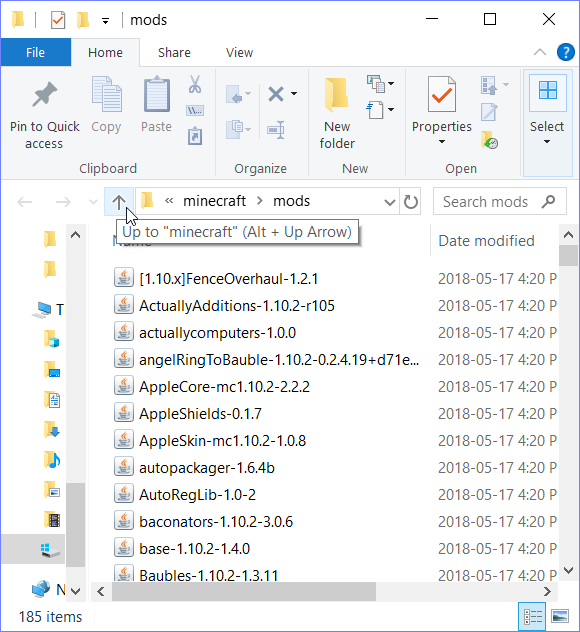 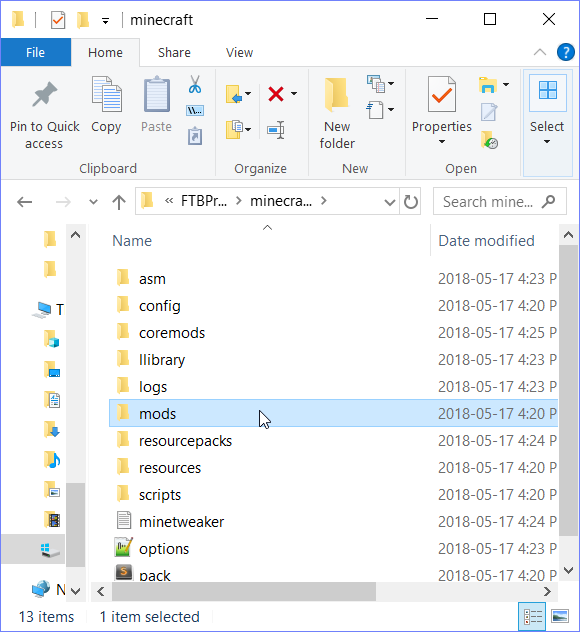 Step 3. Copy the mod .jar file into the mods folder.

Now, open the “mods” folder if you haven’t already. Copy the .jar file from the mod you want to install out of the Downloads folder, if you didn’t do that in Step 1. Paste it into the mods folder of the modpack. Congratulations!
For most mods, this is the end of this step. Certain mods, such as SoundPhysics, may have an extra folder that needs to be copied to the resourcepacks folder or another location. In these cases, they should have installation instructions on where the other files go.

Now, launch the pack normally. The mod will generate any additional config files it needs during the startup process. Congratulations! You’re done! Enjoy playing with your new mod, and if it does something cool, maybe tell your friends so they can enjoy its effects too!